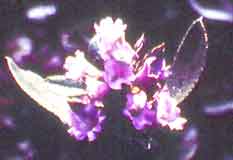 Tholkapiar sang about them centuries ago-- of neelakurinji plants that blossoms like a carpet over the mountain peaks once in 12 years. That romantic blossom may not be there in the next century for the future generations to sing about. For that plant is today the part of a dying ecosystem.

A group of nearly 40 men and women set out from Kodaikanal on foot in September 1989 to have a look at the plant and campaign against its destruction. There were young and old from Mahe and eight districts of Kerala. Some activists of the Palani Hills Conservation Council, Kodaikanal,including like C. J.John; a native of Hyderabad, Israel Bhooshi, and a few English women joined them for one or two days walk. They returned before the march reached its destination-- Munnar, across the Palani hills. It was on the Palani Hills that neelakurinji was last found in abundance. 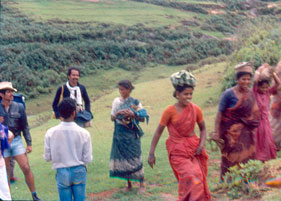 G.Rajkumar and others of the Asambu Greens, Trivandrum, who wre behind the spontaneous organisation of the march, were not only concerned about the ecosystem but were also sentimental about the kurinji plants. Mr. Anand Felix Skaria of the Sahyadri Ecology Education Documentation (SEED) and P. K. Uthaman, Field Publicity Officer, Government of India, saw the gradual disappearance of the plant as indication of irreversible degradation of the shola grasslands. This was mainly on account of the raising of plantations of eucalyptus and pines.

Rajkumar and Uthaman were witness to massive flowering of kurinji across the peaks in 1982 along with K. V. Surendranath, Velayudhan Nair and Suresh Elamon-- a phenomenon that would recur in 1994 and 2006. That is, if the plants remain. For under the shade of the plantations, they were disappearing. 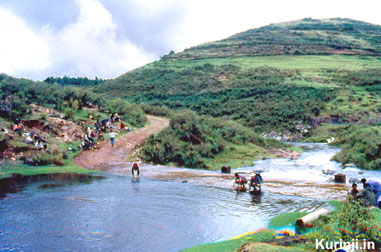 The first day’s trek was the toughest for the group. Heavy rains retarded their progress across the hills and dales between Kodaikanal and Poompara.They could not reach Kavunji, where they were to spend the night, before nightfall. Therefore, they had to get into the main road and reach poondi by vehicle.

Poondi is a small village. But it was one of the links in the ganja trail going to Kodaikanal. A youth from the village introduced himself to a participant of the march and promised to supply ganja wherever he wanted. The youth said he had sold ganja in Kottayam and Ernakulam.

Enquires showed that ganja was being cultivated in the deep jungles on both sides of the trekking path. The officials are bribed to get forestland for cultivation. The running rate in Tamil Nadu for this is Rs. 5000 an acre while one has to pay Rs. 100 per plant in Kerala. Each plant when harvested would fet the cultivator Rs. 1000 to Rs. 3000 depending on the yield. Forests are destroyed indiscriminately to cultivate ganja and armed men keep guard for the harvest. 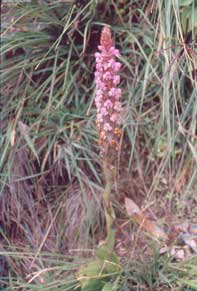 The path from Poondi to Munnar goes through plantations of pines, eucalyptus and wattle. The marchers got ponies at Klavara to help them with their luggage on their climb. Near the top of the hills, men were seen planting eucalyptus on the slopes. As a symbolic gesture of protest, a few youth in the group uprooted ten eucalyptus seedlings in a nursery. This was bitterly opposed by the others who did not believe that such actions would be of any help in protecting the environment. There was also strong opposition to any sample collection.

The first specimens of the kurinji plant were found near the nursery close to the Kerala Tami1nadu border. The crest lines of the mountains marked the boundary. As one crossed the mountain peaks into Kerala forest territory, more and more kurinji plants were seen. They survived in the open areas in between the trees in the wattle plantations. However, under older plantations with wider canopy, the proportion of kurinji plants was lower. They also looked unhealthy and diseased.

They were failing to survive in the shade and in the soil rendered increasingly acidic by the tannin in the falling leaves of the wattle tress. In a congenial environment, the plants would attain a height of up to six feet. The plantations had robbed the region of the natural environment, beauty and character. 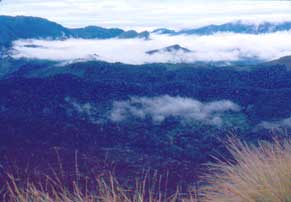 The bees that produced the famous Kurinjithen (sweet honey obtained during the flowering season of kurinji) were still there. But what had happened to the laughing thrushes, brown mantil and Nilgiri pigeons that inhabit the grasslands?

The climb down the hills to Koviloor offers scenic views of the valleys below. There are no plantations along a short stretch near the village. Then it is again plantations up to the top Station at Munnar.

On the third day, the High Range Wildlife Preservation Association, an organisation of the managers of the tea estates there, received the marchers. They arranged for an interaction of of the marchers with the Muthuvan tribes and school children. A meeting and slide show were held under the auspices of the Nature Club, Munnar. The marchers discussed future course of action to protect the grasslands. 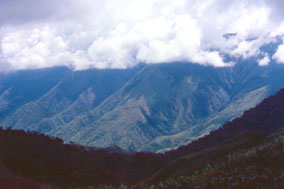 The kurinji grasslands, they noted, are a national heritage with links to the culture of the people in the region. The Government should initiate steps to protect them by declaring the area as a sanctuary. Scientists, forest officials and environmental activists should undertake a joint verification to determine the boundaries. Steps should be taken to prevent fires.

The Munnar Wildlife Preservation Association and the Palani Hills Conservation Council, it was felt, would be able to play an increased role for the protection of the shola grasslands.

The marchers dispersed the next day after a visit to the Eravikulam National Park with the resolve that they would come back for a more intense campaign the next year.